Last year, I baked Christmas cookies and gave to my colleagues and a handful of relatives as christmas gifts.
This year, I came up with the idea of giving macarons in Christmas colours. I've always liked the way they look, really cute and enticing. Most macarons come in pastel colours, which make them appear even more resistable irresistable.
A couple of days back, I tried a supposedly reliable macaron recipe, armed with aged egg whites (which are to work better) and a whole lot of enthusiasm and apprehension.
Other than women, I think macarons are probably the next most temperamental things on earth. I read up quite a lot before I experimented. I remember reading on someone else's blog that she has never known of anyone who has successfully made a macaron on his/her first attempt. She is probably right. Unfortunately, in this case, I proved her right.
I attempted chocolate macarons. The cocoa smell was wonderful and filled the whole kitchen. However, a couple of things did not go right.
Firstly, my piping was not up to mark. There were little twirls which I did not know how to get rid off despite rapping the baking tray on the table top a few times before baking.
Secondly, the feet. What's a macaron without feet? My first tray of macarons did not have feet, not even little toes. I kept my eyes glued to the oven for the second tray, and I swear I almost hit the ceiling when I saw FEET!! Yes! Not all of them had feet, but I saw 2 of them with feet. My excitement was short-lived, because I'm not sure what happened, but they later seemed to succumb to their weight and the feet disappeared.
I swear I saw feet! 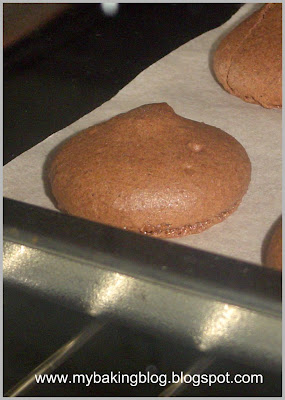 Thirdly, I had the common problem of having the little rascals sticking to the baking paper.
My fourth problem was the taste. Mine was chewy, and it definitely was not how macarons should taste like.
Fifth problem....they cracked. Period. 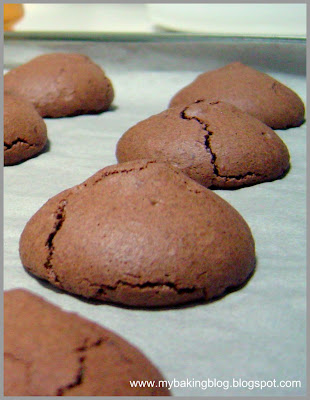 As with every flop, my heart sank for a little while. Looking at my trays of maca-wrongs, I wondered what to do with them.
I did more research, and I think I'm ready to give it another attempt soon. I'm running out of time!!! I need a backup plan!

I totally agree they are tempramental.
That is one reason that i still have not made them.
I am going to try to make them once. But till now don't have the courage to do them.
I hope you get your answers from other bloggers. Who have made them.

For the twirls, when you are done with the pipping, go back with your finger wet in water and tap the twirls. You can also tap the whole cookie sheet on the counter, softly to help with the form.
Good luck!
Are you making macarons with almond meal or just egg whites?

those seem wonderful and a perfect gift to present bimmer..happy Xmas in advance..

Happy Cook - the comments from other bloggers have been really helpful. I'm going to try again soon! Am now waiting for my egg whites to age a day more.

Pilar - that was what I did for my first tray (because I do the same for my cream puffs)..then I suddenly stopped because I do not remember reading about anyone doing the same for macarons. Thank you, you are a consolation! At least now I know that by doing that, I was not wrong! Oh, and I make them with almond meal + egg whites

Ann - I hope they turn out wonderful. Right now, they are chewy, and far from being wonderful, haha. Merry Christmas to you too!

hey bimmer, nice to meet you. i am not a baker, but have a passion for eating. talking about macarons, do you know that in japan, besides the usual macarons we are so accustomed to, there is also a japanized version called MACORON, which uses peanut powder instead of almond? i'll find the best one and i will let you know how they taste like! meanwhile, why not experiment with peanuts too? happy baking!! ganbatte kudasai.

it was wonderful to meet up with you too! Nope, I have not heard of using peanut for macarons, but it is something I can experiment with!
I hope when I get to taste macorons, it will either me visiting you in Japan, or that I am a student of Le Cordon Bleu Tokyo :p

Wow I'm really proud of myself.I have just a little cooking experience (i.e. brownes and cakes) and I tried making macarons for the first time for my high school french class, with just a recipe I found online, and they turned out great! They had feet and everthing. My friend who is from Brazil says they tasted just like the ones she had there. Now, I 'm not saying they were perfect, but they were pretty good I thought. I used a recipe from the East Village Kitchen for chocolate macarons.