i was in a baking mood 2 evenings ago...so i thought hard on how i could make use of existing ingredients i have. i attempted a variation of my banana and choc chip bread (which actually is more like cake...it is in one of the earlier posts), and substituted with apples and cinnamon instead.
The result turned out well, and I like the fragrance of the cinnamon when it is baking in the oven. I only made a very small loaf, because I do not know how it would turn out. In the end, there were only 8 slices. I tried half as soon as it was out of the oven, and my mum tried the other half. Then she took 3 slices to office, I took 3 slices to dear, and left the last slice for my next day's breakfast. I have to admit i really like the taste when it was out of the oven. It was best when eaten warm, the sides are crisp, not exactly like potato chips kind of crisp, but there is a brown layer around the cake, and the inside, warm...it gives a good comforting feeling to have it in the morning.

As soon as dear opened the container, he liked the smell! And how it tasted! It was 8/10 :D 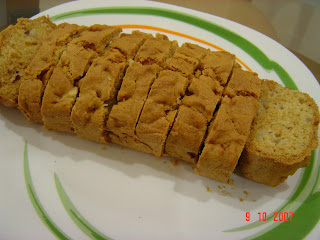 When I had it for breakfast, I warmed it up in the microwave for a little while. Then i added a scoop of ice-cream. Wow! I love it! ..with the soft chunks of apple inside..yummy! 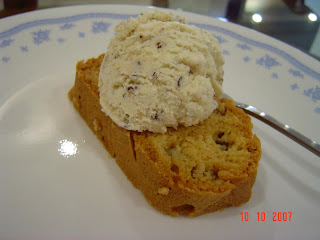 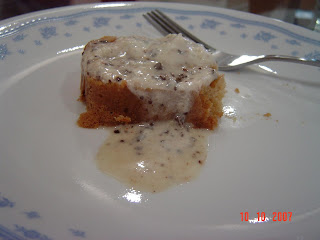