My sister bought a punnet of blueberries yesterday and she forgot to bring them home. So, I used them to make blueberry muffins this evening.
To be honest, this is the first time I am using fresh blueberries! The only other blueberry muffin was the Betty Crocker premix, which tasted really good, or so I thought.
While the little guys were in the oven, I went to iron a few clothing to wear to work this week. Then, "pop", the electricity supply went off. Something had tripped the power. In the darkness, I switched off the electrical appliances and then went to locate the MCB, and tried to turn it on again. After some time, I wondered why my muffins had not browned...
Finally took them out, it made me excited to see the blueberries had burst and stained the paper liners...but the top was a little hard, and the inside was dense. So disappointed. I think my oven is not right these days. It was the same with my banana muffins few days back. The muffins simply would not turn brown, although the top was already hard. I made the second tray, it turned out more pale than the first. Mum came back, and I told her I think the oven may be getting too cool for comfort. She said in mock anger "what! this fellow is so naughty, throwing tantrums huh?". Haha, I think to be fair, this fellow is about 7 years old now, though I keep feeling he's only 3. She tried a muffin from the second tray and it didn't get her thumbs up. :(
Well, I think, there could be these reasons for such unappetising muffins.
1) I overmixed them without knowing, so they were hard? (but I mixed till they were just combined..I couldn't have mixed any lesser or they would be "undermixed"..)
2) The oven is not hot enough
I think perhaps my oven is going through an anxiety phase. I will be moving to my new place in mid June, and he is to follow me. Perhaps he is having the jitters and afraid to go to an unfamiliar place....
Can anyone tell me whether it is time I ditch my oven? Is he getting too cool? Or does the problem lie with me? 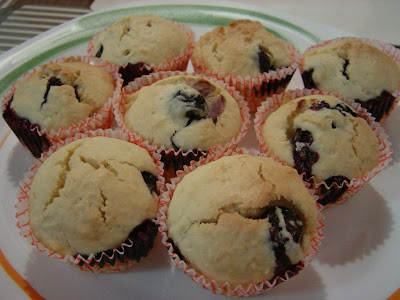 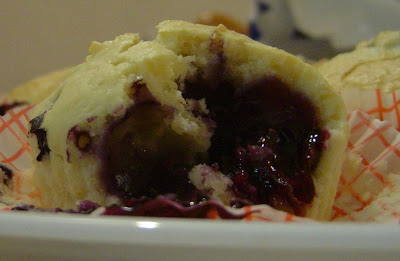 How you blame the cook, i would blame surley the oven ;-)

haha! I would love to push all the blame to the oven! But the truth is I am not that up to mark too! :D

Wow these looks amazing. I love blueberries and these look yummy!