I have finally gotten my own domain name and have moved my blog.
From now, I will be blogging at sandyteo.com.

My old posts will still remain here so that it is easy for you and myself, if we need to search for any old posts (fact is, I am lazy and afraid to lose any posts if I move them).

I have just started blogging at the new domain, so it is pretty quiet still.

Nevertheless, thank you for visiting and please join me at my new place. :)
2 comments: 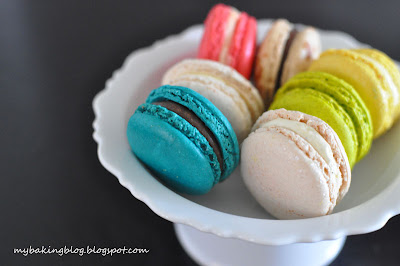 Did I make them?

If you had read my earlier posts here and here, you will know I do not have much beginners' luck with these little guys.

But I bought these, not because I have given up hope, but because I was passing by That CD Shop the other day and saw these colourful little guys in their counter right at the most strategic spot beside their entrance. In fact, these were so eye-catching you'd probably see these and some cupcakes first, before your eyes slowly move on to the racks and racks of CDs they sell.

I love That CD Shop. They have superb speakers and a great sound system and just by sitting there listening to the discs they are playing, makes me have the strong urge to buy a couple of CDs. But I have to promptly remind myself that I do not get that same sound effect in my car or at home (yes, I have fallen prey to their "trick" a few times).

So, what's a CD shop doing, selling cupcakes and macarons? Beats me. Diversifying? Maybe. But they do have a cafe at Marina Bay Sands, where they sell these sweet snacks, so they might just want to have them at every of their store, as a by-the-way thing. 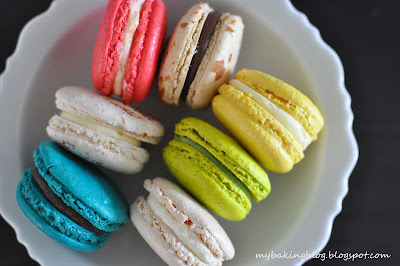 To cut my long story short, I was attracted by that blue macaron. That bright blue one which was shouting out to me. So, I ended up buying 7 of them to try - Lemon, Raspberry, Green Tea, Chocolate, Vanilla, Coffee and Earl Grey. The blue one, to my surprise, is Earl Grey. I was expecting Earl Grey to be errmm, grey. But I guess grey does not look eye-catching huh.

Some of them do not look as perfect as other stores' and their sweetness varies, but surprise surprise, they are actually better than what I had expected from a CD shop. But then again, I'm not hard to please, just as long as they are not too sweet and are in nice colours. 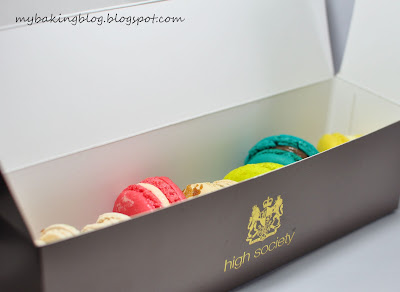 Email ThisBlogThis!Share to TwitterShare to FacebookShare to Pinterest
Labels: Uncategorized

With my recent baking of pineapple tarts for Chinese New Year, I am left with quite a number of egg whites. I can use them for egg white omelettes, meringues or other what-nots, but usually I would just slapped them all over my face for a quick-fix "facial". That is the fastest - no extra effort needed, no messy clean-ups to manage.

It's that time of the year again - Lunar New Year.

Other being a time for collecting redpackets (for children) and catching up with family and friends, it is a time for FEASTING!

Lunar New Year can never be without some new year snacks.

In the past, I have made some quite-melt-in-your-mouth peanut cookies and also some pineapple tarts last year and some 2 years before. This year is no exception.

A new year, a new start

I must admit that I find it increasingly hard to maintain this blog of mine, especially during the past year (or last year, as I now have to say), when I did not exactly embark on many new baking experiments. I had been baking, but on not on new stuff. I don't think you would have liked to read about me baking the same things over and over and neither do I like to repeat myself over and over, so there goes - long periods of silence.
There were so many times when I know I had gone silent for months, and then I find myself struggling to find something to write to you. So if you are still lurking around, I really thank you.

This is a new year, a brand new start, a brand new round of 365 days all over again. If you have been having a great start so far, good for you! If things are a little not so sweet yet, don't worry, you have many days ahead to sweeten them!

Laugh like you don't have a care in the world.
Give unconditionally.
Be humble.
Keep your spirits up and
Have a good year ahead everyone!