My Very Own Kitchenaid!

I got my Kitchenaid mixer!!!!!
Have been drooling and hoping to get one but it's expensive here! Usually costs about SGD899 or SGD 750+ if they have a promotion.
2 days back, I saw a newspaper ad, that the distributor is having a factory sale. They sell many other stuff like hobs and hoods, ovens, refrigerators etc, but I was not interested. I rushed there during lunch time to see if they had any sale for Kitchenaid...and there were a few display sets for sale! They were on display in showrooms before or used for demos previously, hence the cheaper price they are selling now. Comes with 6 months warranty instead of 1 year for a brand new one.
There were only 4 sets - 1 red one, 2 cobalt blue ones and a white one. The blue and red ones were nice but they had much more scratches and deeper dents than the white one I chose. The one I chose has a small dent at the bottom but I feel that is fine with me. They were all selling at SGD559. There was a bigger one, which usually sells for SGD1088 and was there for SGD779. I am tremendously happy. White would be a colour I would choose if I were to buy a brand new one. I like Pistachio, blue, yellow, red and grey too.
Was a little worried about my husband's reaction after my purchase because now that we will be having our own place soon, our priority is to get necessary items for our house first. Nevertheless, this was just a chance that I don't wanna miss, and fortunately, he understands how much I like it. :D 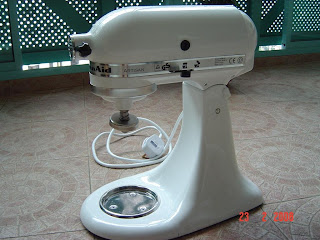 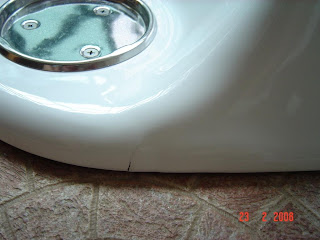 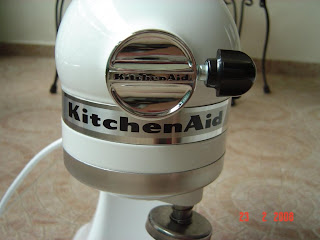 Email ThisBlogThis!Share to TwitterShare to FacebookShare to Pinterest
Labels: Tools

Wow you got a great deal and I can totally relate to your excitment. I too was so excited when my Pink Kitchenaid arrived last year, I had been wanting a KA for years and finally my wish came true! Enjoy your KA!

I am truly enjoying my KA! And beaming from ear to ear everytime I see it :D

Wow you licky girl.
Here too it is expensive so till now i have not bought them and it is also difficult to get them; lot of shops don't sell them they sell the kenwood one.
Have fun with your new toy

it is expensive here too! Good thing I caught it on sale. Otherwise, I would have to wait a few more years to buy it!

WOW what a lovely K.A. and such a great deal too :) I was just as excited when my arrived having been waiting for years for one.

Just chanced upon your site. I bought my Kitchenaide from Meyers like 3 years ago. The price has really gone up since. Anyway, it is the best baking investment I have made. No regrets!