Last night, I baked again...yes, not out on a Friday night..baking at home instead. Dear came for dinner and worked on his laptop while I played around in the kitchen for 2 hours. 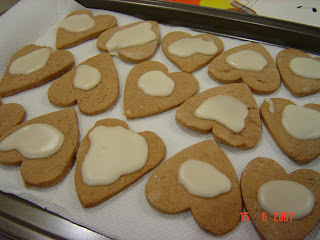 Yucks what the hell is that? Something called Chocolate Orange Biscuits..a recipe I found in one of my recipe books. Not a success...the biscuits were not all crispy, some were, some not. The icing was too sweet, and as you can see, some can hardly be called hearts.

First time I work with a biscuit dough, so I shall practise more and make it better. First time using a cookie cutter to make the shapes, and I realise it is not that easy to transfer the shapes to the baking tray, hence some of the elongated hearts. Good thing is, I realise how to make the dough stiffer and how I can make it better next time.

The icing flowed when I poured them on, though they set quickly. But because the dough was not rolled out evenly, they just flowed where gravity calls them.

Ever wonder why cookie cutters are called so? Cookies do not need shapes...it is biscuits that come in shapes, so they should be called biscuit cutters instead.

Email ThisBlogThis!Share to TwitterShare to FacebookShare to Pinterest
Labels: biscuit